The station will offer a mix of Top 40, Caribbean and dance music and a mix of both local and international news, weather, sports and entertainment news.

Owned and operated by reggae star Buddz (aka Colin Harper), Vibe aims to “keep the pulse of the… While there is still no concrete word on his next album, Curtis took to Twitter to announce he’s dropping a project with DJ Drama (four years later after the original announcement).… Kim Kardashian was attending an event Thursday night to promote her new fragrance True Reflection when a woman busted through the press line at the red carpet and threw baking flour on Kim’s head and back. Last night, New York’s HOT 97 DJ Funk Master Flex went on a long rant during his radio show against Power 105.1 DJ, DJ Clue. The rant was sparked because DJ Clue was bragging about beating Flex in the ratings the night before on twitter.… The Breakfast club interviews "No Malice" of the clipse. I thought it was interesting being such a big Clipse fan... He new thought pattern slightly annoys me However at the end he Kick's a brand new freestyle and its good to know.... THE BARS ARE STILL…

Sooo people must have been throwing shit from the crowd and rocky and his team decided to mash the person. Can't wait for better footage 2 come out but also I wanna see what law suits come out of this one. Tomorrow, DJ Stylez (@80minassassin) will be lashing you 3 brand new mixtape, including this beauty!! Featuring the latest from Rick Ross, Drake Chris Brown and many more of you favorites this one is a MUST HAVE! Also shout to Twanee, her new single "Put it on You" will be featured on the tape.… Swizz Beatz took to Twitter today to officially announce that Rick Ross had signed a deal with Reebok. This would more than likely mean that a signature Rozay/Reebok sneaker would be in the works.REBOK BACK!!!…

Comment If you wish your GF Can do this ??? Comment If you  wish your GF Can do this ??? Whitney Houston's daughter Bobbi Kristina Brown can't stand her name ... because of its association with her father Bobby Brown -- and now, TMZ has learned, she wants to change it all together.

Bobbi Kristina is telling friends ... she's wanted to change her name for years -- ever since her parents split -- but Whitney wouldn't let her. Tyga evoked anger in celebrity blogger Perez Hilton after he tweeted a message directed at "Fa**ots and trannys," in response to a story MediaTakeout had written about him.

Tyga tweeted "who runs mediatakeout. F****ts, trannys, or both??? I'll wait..," to which Perez didn't take to kindly, as he responded saying Because faggots and trannys are bad people that… #CELBRITYPHOTOHOUR : Drake Working Out ( B*tch You Wasn't Wit Him Shooting In The Gym ) Lol 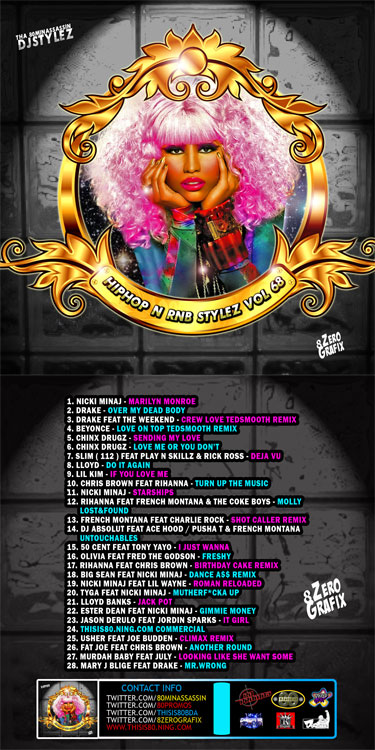 Check Out The Latest Mixtape Mixed And Hosted By Bermuda's #1 Mixtape Dj Tha @80MinAssassin Dj Stylez.Feel Free To Share This With A Friend. HIPHOP&RNBSTYLEZ VOL 68 DROPS TODAY !! GET YOUR EARS READY
VOL67 DID 40,000 VIEWS FIRST 3 DAYS DID YOU HEAR IT ? http://t.co/fvUCIOhj PEEP THE TRACKLIST TO SEE IF YOUR FAV ARTIST OR SONG IS FEATURED !