Bass Bino and Mazi Wit Dat Thang out of Palm Beach County together form a duo called Hiigh Society. Bass Bino born in Queens, NY and grew up in Haiti and Lake Worth. Mazi was born in Pahokee and grew up in Palm Beach. They met in… Continue


Hip-hop is a culture, success is a lifestyle, and Mr. 1204 is on course to be an icon of both. The stylish 6’2” rhymer from Muskegon, MI. commands attention on stages, red carpets, and especially the microphone. His mixtape "Bossness Monster" is scheduled to release in 2019. Mr. 1204’s the owner of both Phat Boi Records and the… Continue Tekashi69 got his date with the judge on Monday morning where he entered a plea in his federal racketeering case.

The rapper who has been behind bars since Nov. 18 was in court, where he entered a not guilty plea. The judge set his trial date for September 4.

The issue of bail was not addressed in court. As reported by his attorney, Lance Lazzaro, plans to apply for bail… Young Quez - It Is What It Is (Shot by: @DJBruceBruce) He's more focused than ever and this time it's major. Pine bluff, Arkansas "Young Quez" has released his new single "it is what it is" and has now added it the visual to "WSHH"… Continue

With an insatiable knack for witty rhyming schemes, blasts of party flavors and putting out production value that is perfect for today’s Hip Hop realm, Country C proves that he’s not messing around in his newest release Staging Lanes CC. Hosted by industry heavyweight DJ Whoo Kid, this record presents us with a modern Hip Hop onslaught of swag rhythms and track bangers… Former Dipset affiliate JR Writer ,Hell Rell & 40 Cal just made it official that "ties" have been cut with the dips as they release their own project "The Upstage" ironically on the same day as "Diplomat Ties".
The song “No Reunions” references the fact that they’re no longer working with Cam’ron, Juelz Santana, Jim Jones and Freekey Zekey. “All my n****s still here, we don’t need no…

Reck Yosiah is a serious artist who studies other serious artists such as J. Cole, Drake, Tank, and Miguel. His respect for these artists goes beyond the music and delves into their ability to stand apart and alone in a world of sameness. This observation and inspiration by these artists play well with his name which translates into “Take heed of the… 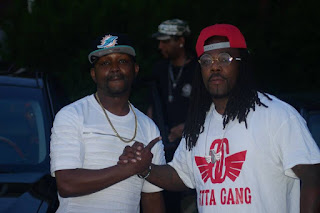 
Tueazee is an exciting music group based in Augusta, GA. They have been making music for about a year now.
Releasing music under the J Tizzle Muzic label, the group recently unveiled a new, exciting single titled “I Know.” The song is a great example of Tueazee’s pure and uncompromising combination of new and old-school… Continue

Local Atlanta artist, KidSyc, is not taking his foot off the pedal as he continues to deliver trendsetting content in this hip hop industry. The visually and lyrically creative emcee incorporates both the past and the present into his flow and music. KidSyc is a true student of the game and he looks up to artists of the 90s, like Tupac And Eminem in particular.…

Born Airel Culver , better known as Young street nigga Juvy or “ YSN Juvy “ . I was born & raised in fort pierce fl , where the crime rate is high . Mostly unsolved murders & and robbing goes on , my dad was never around , leaving my mama to struggle every moment of my childhood which made me leave home and get in the streets . I was arrested numerous times as a juvenile in and out of trouble couldn’t stay in school , it was nobody to support me I had to get money . I started rappin…