Two of Bermuda’s top athletes are involved with the fundraising efforts of ‘Friends of Hope’ for the Dame Marjorie Bean Hope Academy, with elite runners Chris and Ashley Estwanik joining forces with the charity.

Dame Marjorie Bean Hope Academy is a government school that provides educational and therapeutic services to special needs students. Speaking with President of Friends of Hope Ifor Hughes, he tells us that ‘Friends of Hope’ is a registered charity that provides resistance to the school. The bulk of the fundraising efforts go towards sending the students on special summer camps abroad, that cater to their specific needs. ”Team Hope” is one of their largest fundraisers. 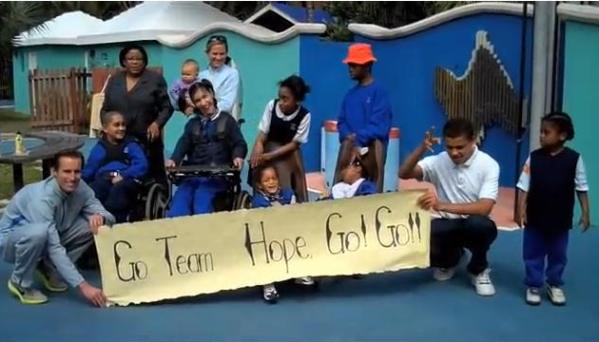 Chris and Ashley Estwanik pictured with the students

-
Mr Eswanik is a former top college runner and professional runner with Nike Farm Team. His wife represented Bermuda at the 2006 Commonwealth Games in Australia, where she made the finals and set a new Bermuda record of 4:10:48 in the 1,500 metres.

Both Estwaniks are former winners of the May 24th Marathon Derby, becoming the first husband and wife team to win in the same year in 2008, and are both considered favorites to win the 2010 race.

Regulars on the local road racing scene, and frequent winners, Ms. Estwanik was the first female finisher at the 2010 Lindos to Lindos in a time of 37:03, and Mr. Estwanik recently won the 2010 Ed Sherlock 5K cruising to victory while pushing the couple’s baby girl the whole route.

Regular supporters of community events, both Mr and Mrs Estwanik recently shaved their heads in support of the St Baldrick’s fundraiser on March 19, which supports children stricken by cancer. The Estwanik’s sponsors contributed in excess of $25,000.

Mr Estwanik says he and his wife were introduced to Hope Academy upon their arrival to the island. Speaking of the staff and students at Dame Marjorie Bean Hope Academy he says:

They represent the kind of inspiration that I wish more people in this island could see. If you spend a few minutes with the kids up at the school, you will leave feeling excited about the opportunities that these children are being afforded thanks to the hard work by all involved with Hope Academy. We welcome all those competing in May 24th to come be a part of the team by raising funds in support of Dame Marjorie Bean Hope Academy as they make their way from Somerset into town.

Additionally, my next door neighbor that I grew up with suffered from Muscular Dystrophy, which took his life at far too young of an age. As my running career was taking off, he was my biggest fan and never exhibited anything but happiness for me. Meanwhile, each day he was bound to a wheelchair often times in tremendous pain. He taught me to appreciate many of the things that we all take for granted in our daily lives.

The children of Hope Academy continue to remind me, as well as many others, of just how lucky we are. I’ve always considered myself a passionate athlete and found my performances were best when I was running for something greater than any individual accolades. Thus, when I went through my struggles, I found motivation from people in my life that I knew were not as fortunate as me.