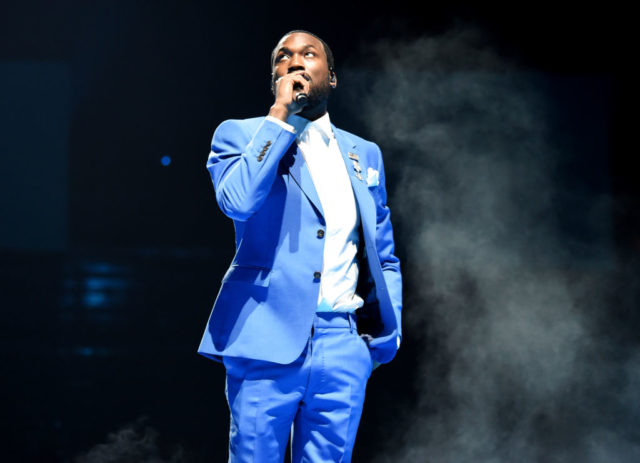 The Grammys can be tone-deaf about a lot of things — most things — but the show got at least one thing mostly right last night. The all-star tribute to the late LA rap hero Nipsey Hussle was a nicely executed moment of catharsis. Nipsey was murdered last year at the age of 33, and his story has a special resonance in Los Angeles, the city that hosted the awards last night. Before John Legend, DJ Khaled, YG, and Kirk Franklin emerged to pay their respects, two friends of Nipsey performed a new song in his honor. Today, the studio version of that song is out in the world.

Meek Mill, a Nipsey Hussle contemporary, got together with the newly minted rap star Roddy Ricch, a Nipsey protege, to record “Letter To Nipsey,” the song that they debuted last night. There’s a long tradition of rap songs dedicated to dead peers, many of which are overwhelmingly popular. “Letter To Nipsey” goes for heartfelt intensity rather than pop sweep. It’s a worthy entry into that canon.

On the track, Meek vents passionately about the loss of his friend: “I ain’t finna say it like I’m your main homie/ But when we lost you it really put some pain on me/ Got me scared to go outside without that flame on me.” Roddy Ricch, who isn’t really a passionate presence, simply sing-raps about how numb he was when he got the news. He also sings the hook. Listen to the track below. Rapper Nipsey Hussle who was recently gunned down was working on a documentary that will take an depth look at Dr. Sebi’s Trial in 1985. Dr. Sebi who claimed that he could cure AIDS was allegedly executed by way of U.S. Medical Corporations because his AIDS remedy would take away from their own profits.Actor Nick Cannon is dedicated to picking up where Nipsey Hussle‘s work on waking up the world ended. The hip-hop veteran has promised to continue the late rapper’s movement following his shocking Sunday slaying.
On Monday, Nick went to Instagram to speak up on Nipsey and shared footage of late herbal healer Dr. Sebi who Hussle had centered an upcoming documentary on.
"And the Lord said, “Job well done my son..” @nipseyhussle King this is how I want to remember you! Laughing! Smiling! I ain’t slept yet, thinking about our conversations! Real ones from a real one! And I’m gonna say this only for the real ones to recognize. Where you left off, we gonna carry one! It’s a MARATHON, so I’m picking up the baton! Because they can’t kill us all! Spiritual Warfare is REAL and in full effect. And now your Spirit is protecting your community eternally! Your words, your steps, your walk always was and always will be SOLID! Now, Your message is my message! Your work is my work! I know you still rocking with us and your voice will never be silenced, because to be absent from the body is to be present with the Most High! So now that you are at Peace don’t Rest... Keep leading... Keep Shining King! Cosmic Love My Brotha!"

Lathan and another man were injured in the same attack that left Nipsey fatally wounded. To add insult to injury, Lathan has now been arrested for associating with gang members, which is in violation of his probation.

One of the standard conditions of parole is not associating with known gang members, and police claim Nipsey was a member of the Rollin 60's Crips.

Lathan is now in Men's Central Jail in downtown L.A. where he waits as authorities try to revoke his parole. Lathan is in a wheelchair -- the result of the shooting -- unable to walk. 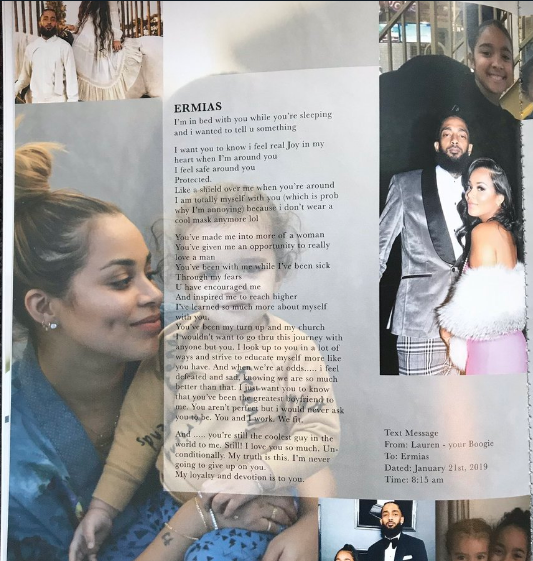 A touching text message that Lauren London sent to Nipsey Hussle earlier this year has been included in the memorial service program. Nipsey, 33, was shot and killed on 31 March in south Los Angeles and around 20,000 fans, friends and family have gathered at Los Angeles’ Staples Center today for his memorial service. The order of service features two pages dedicated to Lauren and Nipsey’s five-year relationship. Notably, a text message which Lauren, 34, sent to Nipsey one morning in January at 8:15am while he was laying in bed beside her, has been printed. It reads: ‘I’m in bed with you while you’re sleeping and I wanted to tell u something. ‘I want you to know I feel real joy in my heart when I’m around you. I feel safe around you. Protected. Like a shield over me when you’re around. I am totally myself with you (which is prob why I’m annoying) because I don’t wear a cool mask anymore lol.’ The lengthy message continues: ‘You’ve made me into more of a woman. You’ve given me an opportunity to really love a man. ‘You’ve been with me while I’ve been sick. Through my fears. U have encouraged me, and inspired me to reach higher. ‘I’ve learned so much more about myself with you.’ Lauren continued: ‘You’ve been my turn up and my church. I wouldn’t want to go thru this journey with anyone but you. I look up to you in a lot of ways and strive to educate myself more like you have. Nipsey died on 31 March (Picture: Getty Images) ‘And when we’re at odds… I feel defeated and sad, knowing we are so much better than that. I just want you to know that you’ve been the greatest boyfriend to me. ‘You aren’t perfect but I would never ask you to be. You and I work. We fit.’ Lauren concluded the text: ‘And…. you’re still the coolest guy in the world to me. Still! I love you so much. Unconditionally. My truth is this. I’m never going to give up on you. ‘My loyalty and devotion is to you.’ The Los Angeles County Sheriff’s Department confirmed to CBS2 that 29-year-old Eric Holder was caught by deputies sometime before 1:30 p.m. Los Angeles police told CBS2 they were responding to confirm the suspect’s identity as Holder.

Hussle, 33, was killed in a triple-shooting Sunday afternoon in a South Los Angeles which left two other men wounded.

“Mr. Holder walked up on multiple occasions and engaged in a conversation with Nipsey and the others that were there. He left and subsequently came back armed with a handgun, and purposefully and repeatedly fired, striking and killing Nipsey Hussle.”

One of the injured men was hospitalized, but the other was treated at the scene and refused to be transported.

Following the shooting, Holder fled in a 2016 Chevrolet Cruz being driven by an unidentified woman. Investigators were searching for both Holder and the female getaway driver.

Nipsey Hussle performs onstage at the Staples Center during the 2018 BET Experience on June 23, 2018 in Los Angeles. (Getty Images)

Moore said that Holder had been engaged in some kind of dispute with Hussle, but did not specify the details of that dispute.

“At this point in our investigation, based on witness statements, and the background of those that we’ve identified, we believe this to be a dispute between Mr. Hussle and Mr. Holder,” Moore said.

“It appears to be a personal matter between the two of them in regards to a dispute, and I’ll leave it at that,” Moore added.

The Grammy-nominated Hussle, whose real name is Ermias Joseph Asghedom, was fatally shot at around 3:20 p.m. Sunday in the 3400 block of West Slauson Avenue in the Hyde Park neighborhood. He was shot in front of Marathon Clothing, a clothing store which he opened in 2017. Asghedom was in a longtime relationship with actress Lauren London and leaves behind two children.

A Close friend of rapper Nipsey Hussle reveals that retaliation for the death of Nipsey Hussle has now begun and bodies are dropping behind this & police are advising the suspect "Eric Holder " to turn himself in after relatives have been killed . Watch Below
Read more… Believe none of what you see on the internet without fact checking.
The whole world proved how they do not research anything they see on the internet including ROC NATIONS OWN casanova and Biggs.
Today (Apr. 5), a story claiming that Jay-Z is creating a $15 million trust fund for Nipsey Hussle's children went viral allowing for many friends and collegues of the mogul to repost and celebrate the good deed on social media.
Unfortunately, A report confirmed that the headline was taken by a "fake website."

The mere fact that no one questioned the report is probably because Jay has been helping artists and others in the community including helping 21 Savage get out of his immigration troubles ,helping Lil' Wayne pay his taxes and so much more.

If there is a lesson to be learned here... it is don't fall for everything you see on the internet !

Las Vegas, NV, For Immediate Release - With the obvious popularity & celebrity status Young Prezzy has come to embrace over the years while working with artists such as Bun B, Sean Kingston, Lloyd, 36 Mafia, Ludacris & Ace Hood to name a few it comes as no surprise that Young Prezzy has elevated his status in the world of business. As most speak before accomplishing Young Prezzy has surprised us yet again with a very promising announcement that makes much sense for Young Prezzy and his partners alike.

Aside from Urban Junkie Magazine, Bill Boy Media Group will soon be announcing their Energy Drink partnership & Snapback apparel line. Get It Done Marketing & Promotions have already began their work as SirYoungPrezzy.com and MixtapeBully.com is already embracing thousands of visitors per day to the website itself.

You can expect Bi-Monthly issues of Urban Junkie Magazine, partnerships, upcoming venture announcements and a host of SirYoungPrezzy.com & MixtapeBully.com endorsed mixtapes as Young Prezzy continues to demonstrate why he is all actions and no talk. He seems to have the Midas touch and hasn’t had any problems embracing & maintaining fans and supporters across the world. 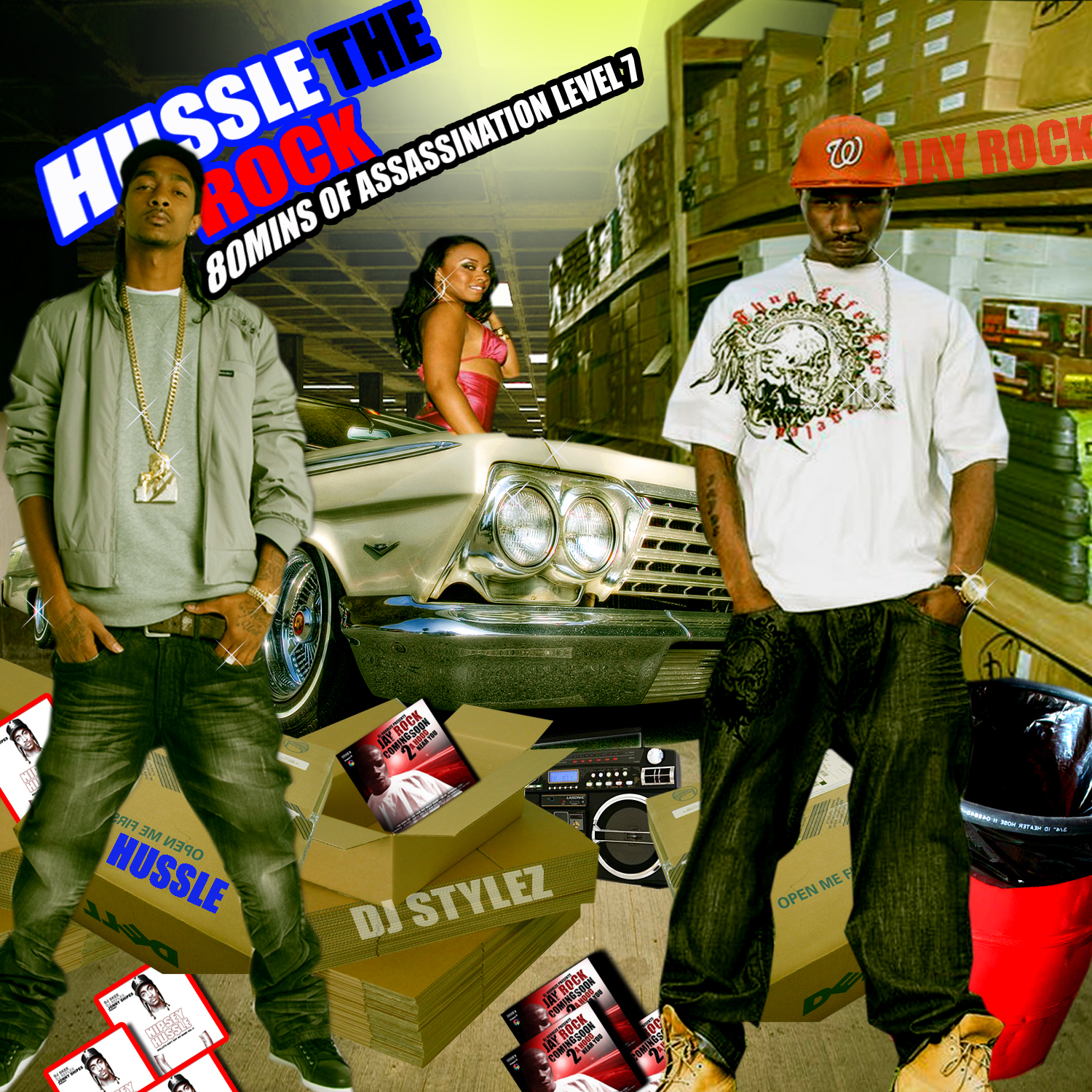